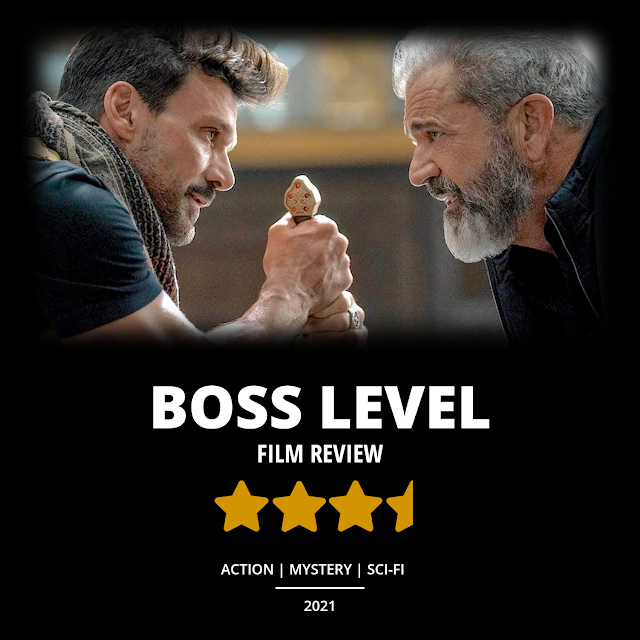 Boss Level is a new addition to the time loop genre, with a twist. Ex-special forces officer, Roy Pulver, played by Frank Grillo, relives the same day until he dies. Every day he is hunted by assassins and when killed, he wakes up back in his bed where he started, only to have to try and survive all over again. Roy has no idea why he is stuck in this infinite time loop but he must do what he can to survive, and the longer he survives, the more he uncovers about his particular situation.

Unlike most action films that take time to build up, this film gets right into it and offers tons of non-stop combat sequences that would satisfy any lover of action films. Its erratic flow makes for some fun action scenes which come out of nowhere since Roy can expect the assassins to attack at any moment. If you play video games often and have ever been stuck on a level for hours or even days, you know the feeling of having to repeat the same thing over and over again until you finally figure out how to pass the level easily the next time. Boss Level pays homage to this as Roy moves further in time after many attempts to beat a person or try to gather more information on how to solve a dilemma.

The assassins are a really fun part of the film and help add a nice range of action that constantly feels fresh. I can sense the enjoyment the creative team had when creating each assassin. Every one of them has a particular set of skills, represents a different style of fighting, and has a unique costume to fit their overall esthetic. They also each represent many tropes found in video games. For example, one of the bosses is a carbon copy of Roy played by actor Eric Etebari. Their encounters are hilarious as they both are constantly dressing alike and put up a consistent fight.

One of my favorite assassins was named Guan Yin, played by Selina Lo. She is this bad-ass sword fighter who gives Roy a run for his money. I must add, she was equally funny and her signature catchphrase was a nice added touch that had me laughing each time. It made me think of many famous catchphrases like "get over here" from Street Fighter. Guan Yin wasn't the only funny character, the film also boasts the comedic power of Will Sasso and Ken Jeong and offers many hilarious bits in their unique style. The uniqueness doesn't stop there as the films acting range includes Mel Gibson, Naomi Watts, Michelle Yeoh, Rampage Jackson, and the double touchdown scoring Rob Gronkowski from this year's Super Bowl.

I was pleasantly surprised for the film to have such a warm and enjoyable side plot that saw Roy rekindle his relationship with his son, Joe. As the two bonded over video games like Street Fighter and Defender, it gave the film a nice even buffer in between the action sequences, as Roy progressed through the game. Fun fact, Joe, played by Rio Grillo, is Frank Grillo's son. Many of these scenes show us the leading man that Frank Grillo is. and the dynamic range he has which is only starting to shine through in his latest roles.

I was first introduced to Joe Carnahan's work from Smokin' Aces and have been following his work ever since. His balls to the wall action style and fast-paced filmmaking fit the time loop genre well. That is one of the reasons why Boss Level worked so well. He also has a great relationship with Frank Grillo after working on many projects together over the years.

Boss Level is a really fun action flick that does not take itself too seriously and pays homage to action films and video games in really awesome ways.

I am Stefano Bove, and I have written this! If this joke does not make sense, watch the film and come talk :)