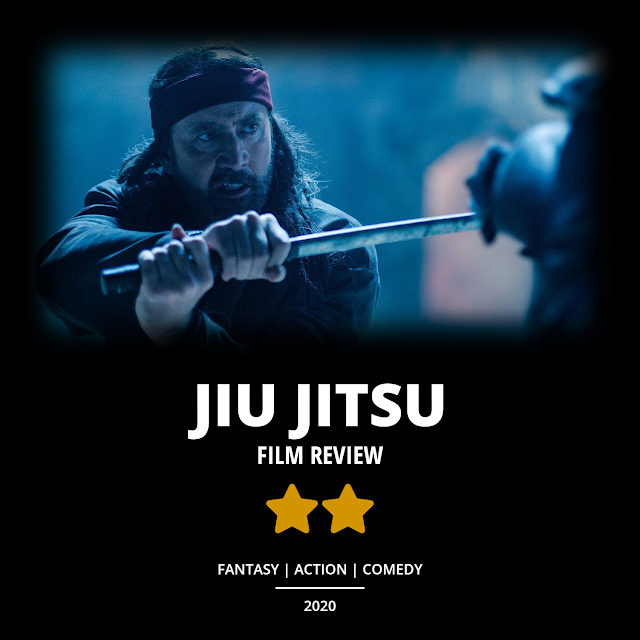 Jiu Jitsu stars martial arts skills in the lead role with Alain Moussi, Nicolas Cage, and other familiar faces, which all together form an ancient order of jiu-jitsu fighters who, every six years, battle a vicious race of alien invaders in order to save mankind. The movie itself sounds a bit ridiculous in terms of its plot, and I can assure you that it lives up to the description above.

I'll give it to you straight with this review because if you're looking for an exceptional film with fantastic dialogue, interesting characters, top-notch acting, or intriguing themes, then this probably isn't the movie for you. However, there are some positives with the film that could have an appeal to many viewers around. Jiu Jitsu feels like one constant fight scene as it rarely takes a break from the skillful martial arts battles between the characters to lay the groundwork for something bigger. Therefore, if a martial arts action film is something that you like, then it may be worth a watch, since almost all the actors can seriously kick butt. The showcasing of the actors' skill in fighting is amplified by its cinematography, which features long takes of the fight choreography. In addition to the above, the film features some aggressive camerawork which keeps pace with the flow of the action, although it sometimes feel too over the top.

In terms of acting, the cast didn't have much in terms of script to work from, but the non-lead roles tried to make the best of it with some small scenes where they can display some emotion, or provide fun comedic relief. In terms of the lead role, Jake (Alain Moussi), there never really feels like a moment where you connect with the character since it was written very one-dimensionally. The main character ends up coming off as a clueless actor standing on center stage, whose only job is to fight while everything happens around him.

Jiu Jitsu is not very unique as it borrows heavily from past movies and seems to take a Jason Bourne-like approach to a Predator inspired plot. Although this may offer some intrigue, it was never executed with the level of tact that those films did.

Overall, Jiu Jitsu is engaging enough to watch if you are solely focused on the action, but don't expect much more than that.