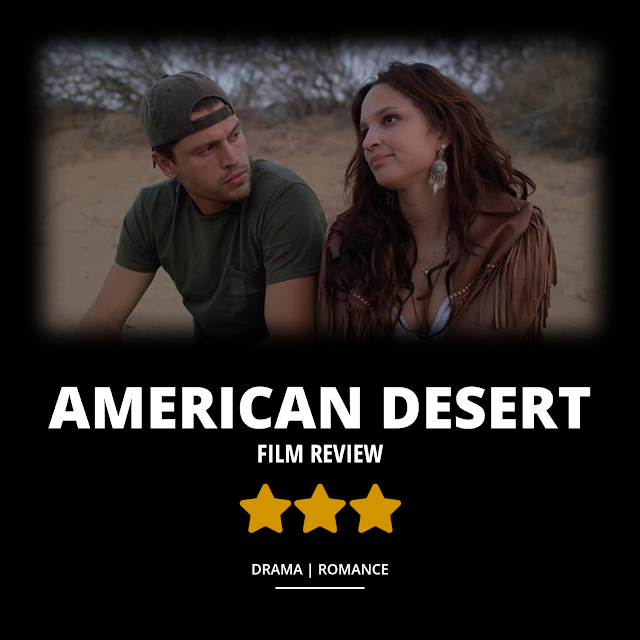 American Desert is a film about a military veteran Matt Benning who finds himself entangled in a vicious cycle of drugs, violence, and toxic relationships. Matt starts out the movie as an unemployed and down-and-out character trying to assimilate back into civilian life, as he deals with personal issues, including alcoholism on top of his use of prescription drugs. He uses these outlets as a sort of coping mechanism for PTSD from his tours in Afghanistan. He then meets a girl who you think will seemingly pull him out of this funk with lots of love and care, since she helps him get a job and they develop a strong relationship. However, this road isn’t without a whole new set of problems to face, vices to consume, and just overall bad people to be around.

Without giving too much away, this point in Matt’s life is truly a scenario where it seems to have to get worse before it gets better. Matt makes the decision to take matters into his own hands, and be accountable for his problems on this journey through life. The only way that Matt sees he can do this after going through such a hard time and getting involved in things that negatively impact his life, is to seek solace in the emptiness of the American desert.

The beginning of the film sets up the plot well enough, but there were some issues with editing and story flow which distracts slightly from keeping the audience fully invested in the scenes early on. These issues seem to disappear as the film goes on as it quickly starts to come into its own. The plot is easy to follow and keeps you interested in wanting to know what happens next, while giving you a mix of emotions with highs and lows, allowing for some misdirection in the story arc.

The characters themselves, most notably Matt (Will Brandt) and Brandi (Ruby Modine), were portrayed in a very realistic way, keeping them grounded and relatable, even as they go through their own issues. I found that the chemistry between them on-screen was great and enjoyed their scenes together since you feel their range of emotions that go along with their many shared experiences. Uncle Bill (Michael Ironside) was also one heck of a character to watch, as he very intensely portrays a psychotic drug dealer, who only seems to show some shred of morality when it works to his favour.

Aside from the characters, the sets used in the film felt lived in, and matched with the plot and characters. In terms of plot, it is mainly straightforward and the director gives us a constant stream of story elements to consume. I had some issues at times with cinematography, and particularly the camera use where I felt that in certain scene the characters were not framed well enough, or the angles used didn’t take full advantage of the scenery and locations.

On the other hand, my favourite part of the film is probably the last segments where Matt uses the desert as a sort of detox for his past problems. Matt essentially banishes himself to the emptiness of the desert, where he can directly avoid the consumption of drugs/alcohol, and keep himself away from bad people and other negative things in his life. This loneliness and isolation in the desert is where the main character truly forces himself to hit rock bottom, and strip away every external factor impacting his life, thereby creating an empty slate to build up his life from again. It offered a nice message of having hope and the self-motivation to live a better life, after battling through difficult times.

The acting performances, realistic characters/setting, along with plenty of story for a film under an hour and a half long, is what makes this a quick and interesting watch. However, if you are looking to watch American Desert, it has not yet announced its official release since it is currently making its rounds on the festival circuit, and most recently was nominated for Best Feature Film at the Seattle Film Festival.