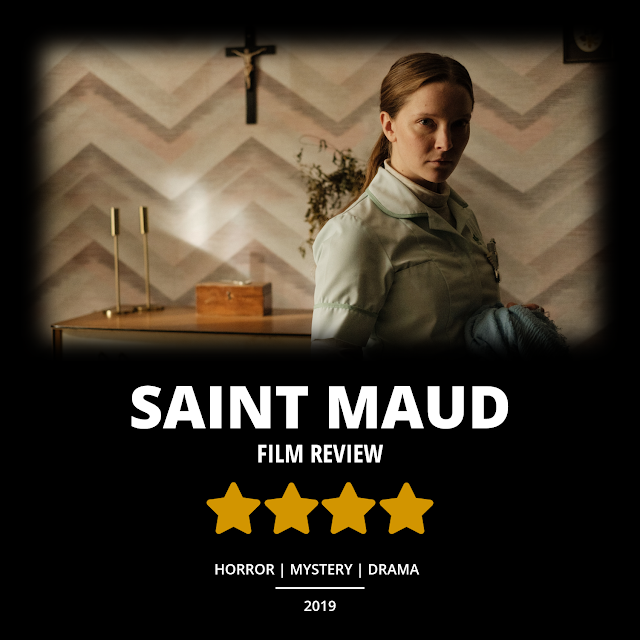 Saint Maud packs a rather large punch in its short runtime. I was expecting a straightforward horror film about a woman possessed to do evil deeds, but Saint Maud is much more than that. It is a rather new psychological horror that focuses on the danger of mental illness left unchecked.

Maud is a troubled young woman who suffers PTSD from a very traumatic event with a patient while working at a hospital. Maud turned to faith for guidance and now dedicates herself to God in an effort to cleanse herself of the traumatic event. Now working in hospice care, and longing for something or someone to connect with, Maud is given her first patient to care for. Amanda is a cancer patient who requires 24-hour care but she has a past that does not align with Maud's religious beliefs.

Like any good horror film, you spend most of your time watching tensely for something to happen, but Saint Maud isn't as giving as most. The pulse-pounding soundtrack keeps you on your toes, constantly implying something petrifying will happen only to make each scene as gruesome as possible. The lighting and cinematography do their part to add unsettling mystery to each moment.

Maud is not one for many words but this is important not only to her character but to the flow of the story, we only truly get to understand her as bits of information begin to come out. In some cases, we even get the full story just through a few short visual flashbacks which is more impactful than her telling us anything at all.

Morfydd Clark delivers an exceptional performance filled with tension, anxiety, and sorrow. I really felt sorry for Maud, as you could feel her loneliness and longing for any human connection throughout the film. There are a few scenes in the movie where she does try to connect with others but she knows her troubled past is a barrier to any further human contact.

One particular scene that stood out to me was when Maud was at a bar having a drink. For a moment, I let my guard down but it was a turning point for me that showed just how far gone Maud was. Even just a casual scene of people drinking made me disgusted. This bar scene showcases the incredible execution behind the scenes using lighting, music, and visuals to make even the simplest of moments grotesque.

This is the first feature-length film for Rose Glass who also wrote the screenplay. She delivers to show us a very vulnerable time in Maud's life that many people go through after trauma but it is how you cope with the events in your life that will dictate your future. People often turn to religion after near-death experiences or traumatic events and as long as it is bringing you comfort and helping you cope, that is the most important thing. As someone who has thought about my faith a lot over the years, this film showcases the danger of religion when radicalized to do something in the name of God.

Saint Maud is worth a watch if you are a fan of horror or psychological horror films. It is a great addition to the genre and also goes into depth about the importance of mental health.