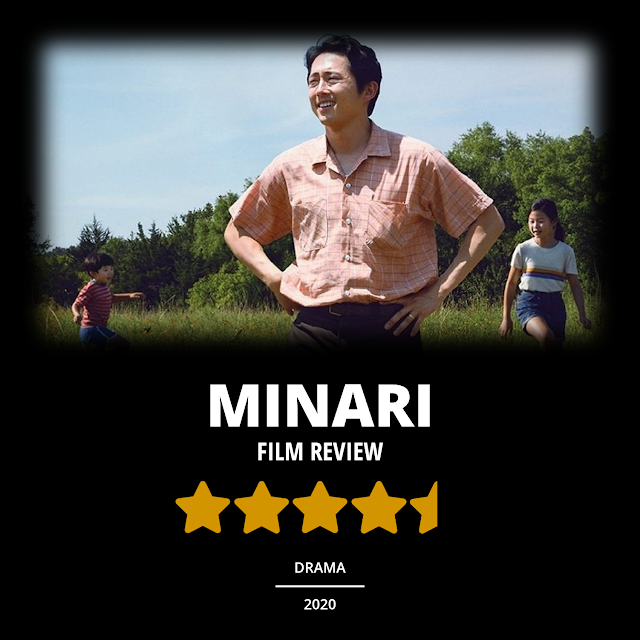 Minari is one of the most inspirational family films I have watched in years. This exceptional cast pushes the limits of their family dynamic, as well as our hearts, as we see them struggle with everyday life problems.

Jacob, played by Steven Yeun, moves from California to a Farmland in Arkansas with his family. The goal is to build a sustainable farm and live the American dream while dealing with many real-life issues that test the resilience of the household. He and his wife, Monica, played by Han Ye-ri, are recent immigrants from Korea in search of a better life for their kids. Jacob's dream of owning a farm brings the family to Arkansas with the purchase of a large farm and a house made out of an eighteen-wheeler. Monica is not fully happy with this plan for many reasons but goes along with the move to keep the family together.

Director Lee Isaac Chung wrote and directed this semi-autobiographical film in 2018, ironically around a time he was considering retiring from directing. Though not a factual documentary, Chung included many memories into the film based on his childhood home in Arkansas. The fact that the film is based on many important moments in Chung's life is the driving force of the film. Early memories help to define who we are and Chung uses Jacob's son, David, as our guide through the film, allowing the audience to witness all these beautiful moments in his life unfold before their eyes. Moments of discovery, moments of understanding, and moments that teach him life lessons. Every member of David's family teaches him something important about life at some point in the film and these moments will define him for the rest of his life. Many of these important life lessons come from his relationship with his grandmother Soonja, who he spends all day with while his parents are at work. The two often travel down to the creek where they have started a small garden of their own with a plant from Korea called Minari, echoing the much larger garden of American vegetables that Jacob has grown.

Their kids Anne (Noel Cho) and David (Alan Kim) are at a very delicate age in their lives and Monica knows that their new environment will be a major change for them. One of her fears is the loss of their Korean culture because there are only a few Koreans in the new town they live in. Monica's mother moving in to help out with the kids is one of the ways they try and keep the Korean traditions thriving in the house. David also has some unexplained medical issues early on and living in the middle of nowhere poses an issue in the case that a hospital is needed for him. All of these issues are just some of the things that the family deals with which are easy to sympathize with.

The family is also struggling with their faith in the film. Having moved to a new town, working new jobs, and balancing new priorities, Monica worries that the kids are not going to practice their faith as often due to the town not having a Korean Church, but they choose to attend the towns Sunday mass in order to provide their children with an outlet to continue practicing their faith as well as interact with other local kids. Ironically, as everyone struggles with their issues, the one character that seems to be the happiest is also the most faithful in the film; Jacob's farm helper, Paul, is an extremely dedicated Christian who carries a cross around town each Sunday. To the Yi family, he comes off as a nut but he is often the voice of reason and offers his opinion in many situations, even though he is often discredited.

As the head of the household, Jacob often has to deal with very difficult decisions that sometimes put the family at risk, and he often makes these decisions without even discussing them with Monica. Jacob's desire to succeed sometimes clouds his judgment and puts his family in harm's way but that he lives with his choices and continues to fight tomorrow. Regardless of how big or small; any choice you make in life has a repercussion and many of the choices made by the characters, seem to come full circle in the film. They often present themselves as new problems or make situations worse, however, it is the family's determination to learn and grow through these decisions that is most important.

I really connected with this film and the Yi family, so much so that each member taught me something about myself in one way or another. Minari is now available on all Video on Demand platforms.