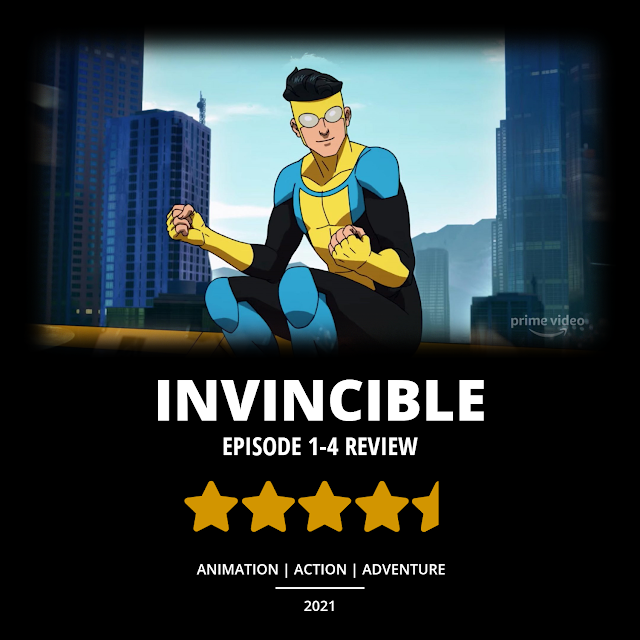 The first half of Invincible is available to watch on Amazon Prime. This 8 episode mini-series brings the famous 'Invincible' comic series to the digital screen. If you like the animated genre, Invincible is an incredible addition that also excites me for the future of the genre. Unlike live-action, animation has no limits in terms of budget or storytelling, and Invincible capitalizes on this by giving us one of the craziest and over-the-top superhero stories on screen.

The invincible world feels like a parody of a bunch of superheroes mashed together. Think the DC universe mashed with shows like "The Boys" and "One Punch Man". It makes it a lot of fun to see parody versions of characters that we know and love like Batman, Superman, and even Hellboy.

The story follows Mark Grayson who is the son of the world's most famous superhero, Omni-Man. Mark knows he will inherit and develop an incredible amount of power but he is just waiting for it to happen. We watch his origin story unfold as he learns to control his power and immerse himself in the superhero world, but he very quickly discovers that being a superhero and putting himself in danger comes with consequences.

Invincible boasts a massive cast, worthy of a blockbuster; including, Sandra Oh, J.K. Simmons, and Oscar-nominated actor, Steven Yeun. The story allows these talented actors to push the family dynamic and offer many deep character moments. The supporting cast of heroes and villains are really fun and offer so many fresh takes on many of the classic superhero abilities.

In just a few episodes, Omni-Man demonstrates some of the largest displays of power next to some of the heavy hitters in the MCU. It will be interesting to see how far they push the character throughout the season considering its unlimited budget.

The final moments of the first episode are not only one of the most shocking moments ever seen on screen but a pivotal one that truly separates it from the rest of the superhero genre. With such uniqueness and intrigue displayed only halfway through the series, I have high hopes for the remaining episodes and seeing what it continues to add to both the superhero and animated genres.