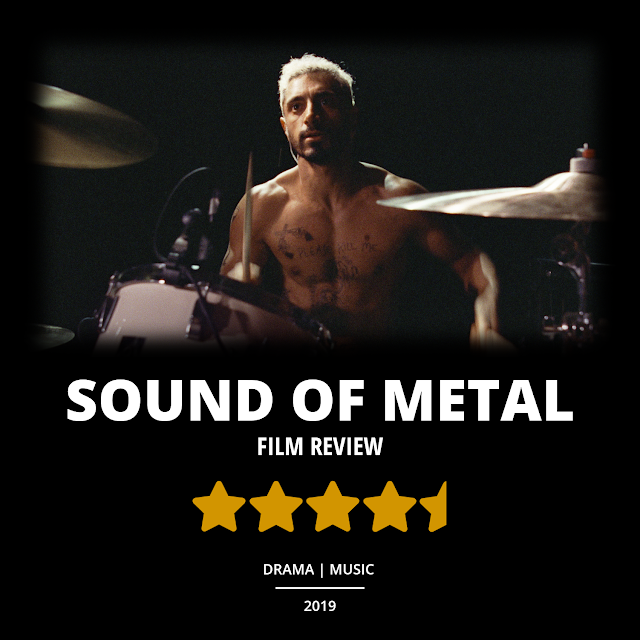 Sound of Metal is a story about Ruben (Riz Ahmed), a drummer in a metal band who begins to suffer from severe hearing loss, and the film takes us on his journey through such a life-changing event. This drama is thoroughly engaging as it features a great story, top-tier acting performances, an intriguing theme, as well as probably the best sound design of the year. (Warning: Spoilers Ahead)

The flow of the story is constant and feels highly realistic, which kept me thoroughly locked in on the characters and wondering where the plot was headed next. With Riz Ahmed's character at the center of the film, he shows off some top-tier acting while portraying the raw emotions that Ruben is going through, making the audience feel every bit of anger, frustration, and other emotions on this rocky road on the path to acceptance of his hearing loss.

The theme of acceptance is where the movie genuinely excelled since it hammers home that being deaf is not a problem at all, it is our thoughts about it, wherein lies the real problem. The driving force of this great message certainly has to be Joe (played by Paul Raci), who is a teacher at the deaf community that Ruben joins. His calm, collected, and soothing persona provides the film with the perfect guide for both Ruben and anyone watching the film on the path to enlightenment. Changing the way that Ruben thinks about his 'problem', was the only solution to finding his inner stillness, and letting go of all the negative emotions he was dealing with.

Now, even though there's more than enough reason to watch this movie from the details provided above, what takes the cake as the element which weaves the entire film together, is the exceptional sound design. The sound throughout the film is fused seamlessly with the story elements and emotional landscape of every scene. From the simple sounds of breathing or body movement to the simulated screechy noise that Ruben experiences after getting hearing implants, all the way to the moment of silence, the craft behind the use of sound in this film was world-class.