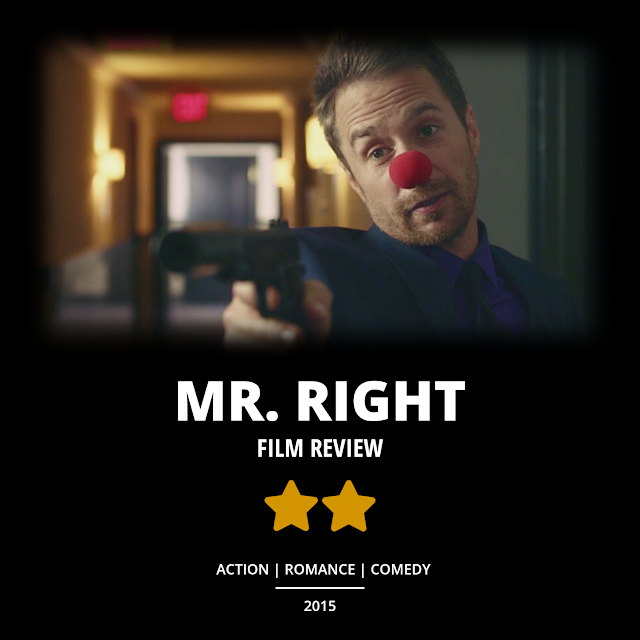 Mr. Right pulled me in with a great trailer and a fantastic cast including Sam Rockwell, Anna Kendrick, and Tim Roth but unfortunately, the film did not live up to my expectations.

Sam Rockwell plays a conflicted hitman named Francis, who's trying to change his ways by killing the men who hire him instead. He meets a girl named Martha, played by Anna Kendrick, and the two fall in love instantly. This attempt at love, at first sight, did not come off the way it was intended and to me, felt rushed and unnatural.

I really enjoyed the first 20ish minutes of the movie as we are introduced to all of the characters. I was laughing at every joke and felt the pacing was quite good, but things began to change as soon as the two stars met. Their dialogue, specifically Anna's, felt flustered at times and much more adlibbed. Francis is surprisingly honest with Martha right away and spills the tea when he does something wrong but Martha always just laughs it off. This exchange is used as a running gag thought-out the film but gets stale very quickly.

Everyone knows Sam Rockwell loves to dance and has a signature dance scene in almost every movie. Mr. Right continues that trend and offers some awesome music to go along with his moves.

The attempt at being a changed man by killing people who hire him is a bit of a weird twist and isn't executed well enough to make Francis a relatable character in any way. Martha also has a very strange development midway through the movie that made me eye-roll with its subtle attempt at introducing some crazy super-human abilities that were really unnecessary.

RZA is also in the movie, playing a gun for hire working with the bad guys but has a playful relationship with Francis as the two almost kill each other multiple times. This short-lived, on-screen exchange was much more enjoyable to watch than most scenes with Francis and Martha.

The action and fight choreography were really fun to watch and made up many of the film's best moments. Sam Rockwell's charisma helped to elevate these moments as he seemingly never runs into any real problems, making the scenes a bit unrealistic. In some cases, he is so confident that he even turns his back on the villain while they are holding a gun.

The movie featured multiple villains including a mob organization run by two brothers, Richard and Vaughn, but they were not convincing enough to be threats and added too much unnecessary humor. Tim Roth is a much more convincing threat but unfortunately had to share the spotlight with the other villains.

Mr. Right is a decent popcorn flick with a fair balance of humor and action. I was able to convince my fiance to give it a try with some rom-com elements as a selling point but it ultimately didn't live up to my expectations.