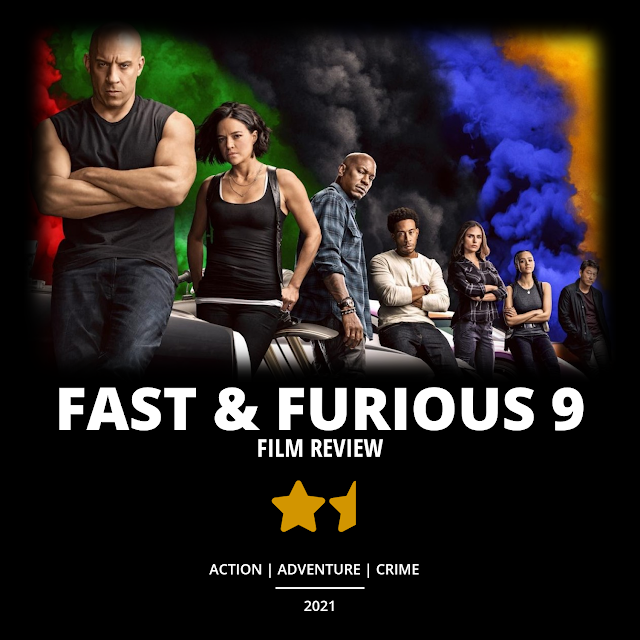 The Fast Saga is like a soap opera. It has overstayed its welcome, and the only way to progress in the story is to come up with more ridiculous plots to top the previous film. The series has become so stale by repeating two simple things; casting big names to introduce as new villains only to turn them into heroes in the next film and by bringing people back from the dead to rebuild the family. This film did not even try to hide these plot points and used the return of Han as a marketing tactic.

The predictable formula continues with the casting of John Cena as the main adversary who also happens to be Dom's brother. This lazy attempt to fill in the timeline by trying to add emotion to the plot falls flat and is only useful as a reminder that after 9 films, we are only just now learning about Dom's past.

I could bash the crazy action sequences for hours but at this point, they are one of the main reasons why I still continue to watch the series.

One of my biggest complaints after nine films is that the majority of the characters seem to be stuck. Letty, Roman, Mia, Tej, and Ramsey all seem to be exactly the same people they were three or even four movies ago. They have all become predictable, stale, and repetitive with absolutely zero character growth. I feel bad for Roman, every film he makes it aware of how dumb and stupid the mission is, then reminds everyone that it is suicide to attempt, only to completely change his mind and go join the battle anyway.

The death of Han has now been rewritten three different times. It is a shame that the backstory of the characters is now so convoluted and messy because they keep trying to bring the character back in different ways. I am a fan of Tokyo Drift, but I am not a fan of this rewrite nor how they treated the Toyko Drift characters.

I understand that these films are purely meant for enjoyment but that seems like a lazy way to get away with making a bad movie.

It is 2092, Humans have vacated earth and now live on an orbiting home called UTS, located in upper earth orbit. Tae-ho, Captain Jang, Tiger Park, and a robot named Bubs are the crew of the ship Victory, a junk collecting ship that trades space junk for cash. While on a routine mission, the crew discovers a cargo ship containing a dangerous humanoid child named Dorothy. UTS' top security is looking for Dorothy which puts the crew right in the middle of the action to save earth from complete destruction.  Tae-ho being the main hero, we get to see a glimpse into his backstory, but I do wish we got to know the rest of the teams' past a bit more, as the film gives us just enough to be invested in them. Captain Jang is a badass leader who does not take any shit from anyone. Tiger Park had some amazing moments, especially with Dorothy, who by the way, is my favorite character. Played by Ye-Rin Park, she adds such an entertaining dynamic to the crew. The film is filled with highs
Read more