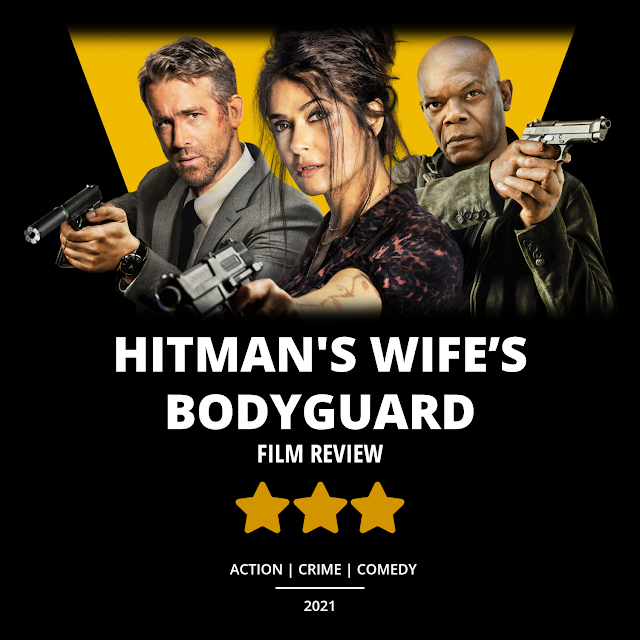 The Hitman's Wife's Bodyguard is exactly what you expect it to be after the first installment, attempting to add more action, ridiculousness, and witty banter between the big-name actors. Ryan Reynolds is always in his element when playing a comedic action star, and paired again with the badass Samuel L. Jackson, they never fail to disappoint in their delivery of vulgar dialogue, or clearing out a room full of bad guys. The critical addition to this sequel was bringing Sonia Kincaid (Salma Hayek) into focus, who manages to even outdo the big personalities of her husband Darius (Jackson) and Michael Bryce (Reynolds), with her over-the-top hilarious performance, which is sure to keep anyone engaged. Who would have thought such a superbly foul-mouthed loose cannon character who constantly has sex on their mind would be fun to watch :)

The plot itself is almost incoherent and I struggle to find the words to even explain it, so I won't go into too much detail since it doesn't matter with this type of film. All you need to know is that this trio of characters needs to work together after being roped into helping an Interpol agent, Bobby O'Neill (Frank Grillo) to stop Aristotle Papadopolous (Antonio Banderas), a Greek nationalist who wants to bring down the rest of Europe for their sanctions during the debt crisis, and restore the country to its former glory. Anyways, that's already more information than you need, but there is also some history between the characters, a funny subplot, and a surprise appearance from Morgan Freeman, but I won't get into detail about that, since it is more fun to see it yourself.

This action movie doesn't add anything very unique to its genre but is it entertaining to watch?...of course it is, even though it continually pokes fun at these types of movies in the process. With its great locations for gunfights and car chases, as well as endless action and improvised comedic dialogue, if you are looking for something easy to watch and prepared for what you are getting into, then you will have fun viewing it. With cinemas back open (in some places), you can check out this movie today on a big screen near you!