Everything Everywhere All At Once Film Review 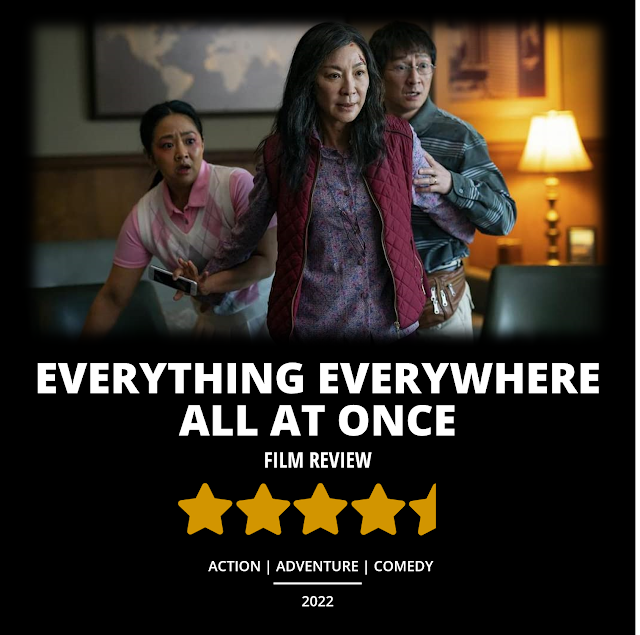 Everything Everywhere All At Once is an absolutely bonkers ride through the multiverse. Move over Dr. Strange, Evelyn Wang is here to save the multiverse and herself in the process.

Evelyn has a major communication issue that steams from her relationship with her father and has made her want to Avoid conflict at all cost while bottling up her anger and frustration. In turn, this has driven a wedge in her relationships with her Husband and Daughter. Constant feelings of regret fill Evelyn’s day as she reflects on what could have been; Is owning a Laundromat really all she was meant to do? This weight bears down on Evelyn as everything around her seems to be crumbling, including the multiverse.

Evelyn is sent on a crazy trip across the multiverse to save both her family and herself. While on this journey, Evelyn is introduced to dozens of versions of the people in her life. What plays out like a way cooler version of a Christmas Carol, for better or worse, we see how completely bonkers the universe can be.

All of these crazy ideas really allow us to tap into the imagination of The Daniels. Their unique directing and writing style have been evident since Swiss Army Man but Everything Everywhere All At Once allows for the creative freedom to let their imagination run wild. Their creative genius is evident in every aspect of this film; The cinematography, sound and writing all worked in unison to deliver this exceptional piece of art. The fact that they were able to accomplish so much with such a small budget (in comparison to so many action films) is a reminder that you are only limited to your imagination.

The writing in this film is truly amazing, everything has meaning and everything is connected to everything. You must pay attention

Most people will enjoy this movie just for all of the crazy antics and action but it is also truly heartfelt. Evelyn is on a journey of self discovery and mending the generational trauma her family and herself have endured all their lives.

Waymond is a fantastic character and I am so pleased that Ke Huy Quan is acting again; it truly puts a smile on my face. Waymond teaches us not to take life to seriously and enjoy the ride. Everyone can learn from these simple lessons as life becomes harder to balance when you age. Waymond plays this important balance and contrast to Evelyn’s character.

Very few movies have pushed me to ride a wave of emotion so seamlessly without being corny. There are so many moments of absolute wackiness that can only work in a movie like this, which makes it incredibly unique.

So far, this is one of my favourite films of the year and will be really hard to top. It is a shame that it is not getting a wider release but hopefully it will with word of mouth. Everything Everywhere opens in theatres this weekend April 8th in select theatres in major cities.