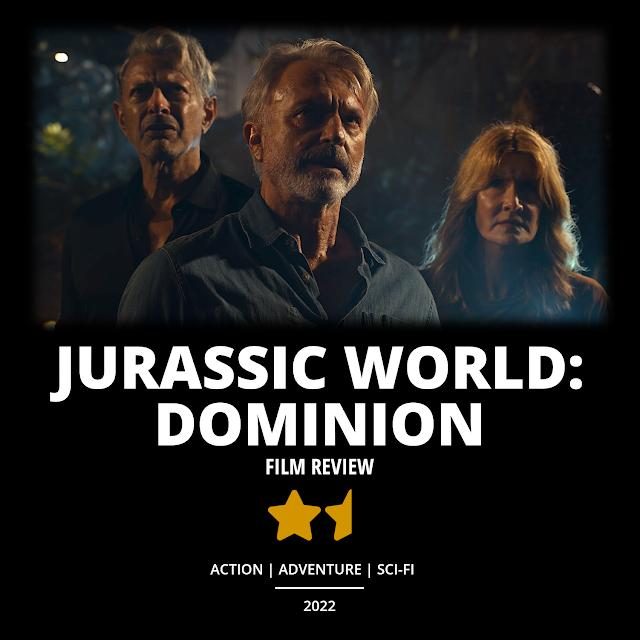 Three different storylines carry the lengthy two-hour and twenty-seven-minute runtime and none of them work. Normally the conversation around the genetic cross-mutation of the dinosaurs isn’t that difficult to grasp, but for some reason, they added another layer to the madness. They added a corporation called Biosyn and Lewis Dodgson (Campbell Scott) plans to regain some control. Then there are people trying to kidnap Maisie Lockwood (Isabella Sermon) because of her genes. And a black market ring that keeps the dinosaurs around to do whatever they please. On top of that, the original cast comes back and takes up the entire storyline with Biosyn. What movie were they trying to make, exactly? If people can’t explain what happens in the movie and there weren’t even dinosaurs fighting each other, then what are people watching this for?

Jurassic World Dominion is a failed attempt in wrapping up its trilogy while incorporating nostalgia with the old cast. For a franchise to end on an instalment that feels disjointed from the rest is simply a disservice to the films that came before it. This is the one franchise that relies on suspense and it was lacking in that department, making the entire film feel empty. It was very predictable and there were no stakes whatsoever because it was all out of convenience to keep the characters alive. Characters would save other characters within seconds, even if they weren’t in the same location. It felt like they did not know the story they wanted to tell and it felt like this movie got butchered in post-production because the editing did not work whatsoever either.

For the full review be sure to check out Amanda's site