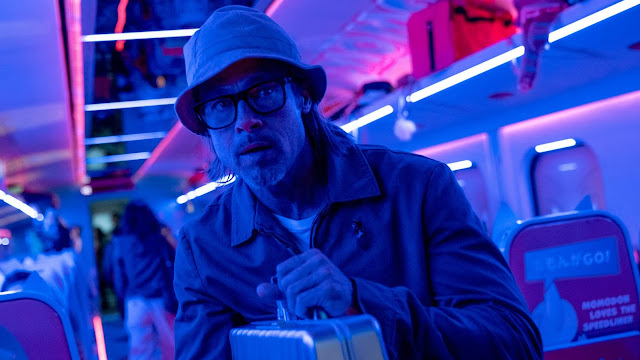 I have not been this excited for an action movie in a long time but the premise of Bullet Train sold me on it from its early promotion, Leading up to it's release, I was really worried that I would be disappointed, I was also worried that the story would be stale and overly long strictly taking place on a train for two hours but after only minutes in, I felt that all of my worries was for nothing.
Brad Pitt plays an assassin who is asked to fill in on a gig for an absent hitman. His mission puts him on a bullet train to find a briefcase and a collision course with almost a dozen of the world's top assassins. This massive ensemble cast pulls out all of the stops and each brings something unique to the story or provides their own style and flair. Initially, all of these interactions seem chaotic as you absorb what seems like unnecessary backstory but it all comes full circle and provides a fulfilling ending and final clash.
The pacing in this movie moves extremely fast and only works because it is complimented with our character physically Moving at the same pace in the train. It is also utilized to tell extremely fast montage sequences. These sequences are fast but stylish ways to provide us with a massive amount of information really quickly. If you enjoyed the pacing in Everything Everywhere all at Once, then you would enjoy Bullet Train as well as they are very similar in this regard.
Two of the main hitmen, Tangerine and Lemon played by Aaron Taylor-Johnson and Brian Tyree Henry have most of the funniest and most entertaining moments in the film. Brian’s character Lemon has this very interesting fascination to Thomas the Tank Engine; his whole personality is hilariously molded around it. He has the ability to see through people and label them as one of the trains on the show, this made for some really funny moments. Lemon and Tangerine have these really entertaining yelling bouts; if this story would ever get expanded, they deserve their own story.
Domenic lewis definitely had a lot of fun with the soundtrack which also featured many Japanese renditions of classic pop songs. The train's many compartments each have something unique to offer, including music that corresponds with the individual assassin.
On paper, This movie should not work but in the hands of one of Hollywood’s current top-action director, we trust David Leitch. Bullet Train offers the right balance of action and humor that you want out of your summer movie.
Bullet train is available in theatres now.
Review by: Stefano Bove
Plot: 7/10
Theme: 6/10
Acting: 8/10
Script: 8/10
Directing: 8/10
Score/Music: 7/10
Cinematography: 7/10
Editing/Effects: 7/10
Uniqueness: 8/10
Rewatchability: 8/10
Overall: 7.4/10