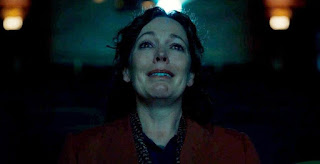 When I heard Sam Mendes and Roger Deakins were teaming up again, my money was already in hand waiting for tickets to go on sale. The project is a love story centered around an old cinema cemented it as one of my most anticipated movies of the year. To nobody’s surprise, Empire of Light is visually stunning, however, a lack of true narrative focus makes for a disjointed experience.

Directors often tell deeply personal stories based on their own lives, and this is undoubtedly Sam Mendes’ most intimate film. In the process of making something near to his heart, he loses sight of telling an actual story. There are several beautiful moments, but there’s a missing sense of connectedness to tie any of them together. It touches on human connection, the power of cinema, racism, and mental health, but never lingers on any one subject long enough to be impactful. The result is a movie that plays out like a collection of individual experiences that Mendes wanted to share with his audience.

Those experiences are brought to screen beautifully, though, largely due to Roger Deakins’ remarkable cinematography. The blanched look of the coastal town gives the film a dreamlike setting that seems to exist outside of time and space. The way this muted palette contrasts with the rich reds and yellows of the cinema’s interior is simply beautiful. The score, composed by Trent Reznor and Atticus Ross, pairs perfectly with the breathtaking visuals, faultlessly capturing the tone of every moment.

Olivia Colman delivers yet another tour de force performance, once again proving she’s one of the greatest actresses of our generation. She’s able to convey so much emotion, be it through dialogue or just a simple expression. Michael Ward shares exceptional chemistry with Colman, bringing a welcome balance of compassion to her character’s cynicism.

Empire of Light is gorgeously crafted, with award-worthy performances from its talented cast. In telling a story a bit too personal, Sam Mendes has pushed his audience away, rather than welcoming them in. There are beautiful themes throughout, but in trying to say too much, the film struggles to say much at all.