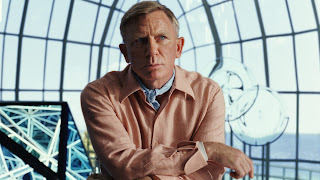 Murder mysteries can come in many forms but the best ones feel like an intricate jigsaw puzzle that feels impossible to even assemble. What director Rian Johnson does in Glass Onion: A Knives Out Mystery is diverting the audience’s expectations at every turn. It takes a bit to become familiar with these characters but once they get to the island it all changes. The story is interesting even though it can feel overwhelming at times. There are many moving parts and each character has a compelling backstory. This ensemble works differently than its predecessor and once Johnson hits his stride in the middle, it is wildly entertaining.

We meet tech billionaire Miles Bron (Edward Norton) who invites his friends for a getaway on his private Greek island. When someone turns up dead, Detective Benoit Blanc (Daniel Craig) is put on the case. First and foremost, Daniel Craig is even funnier in this sequel and adds more to Benoit Blanc’s character. Blanc has been looking for a good case to get back into the groove of things and when this one, in particular, falls into his lap, the audience learns how his mind works. With each Knives Out mystery, Benoit Blanc becomes more complex and an even better detective. Craig is the glue that holds this entire cast together and it’s so fun to watch.

There are always standouts in an ensemble cast, even if they do have a fair amount of screen time and great chemistry. The star of this film is Janelle Monáe. She has such a presence on screen and she didn’t even have to say much. The third act of this film is where she truly shines and she steals the spotlight. The one who had the quippy one-liners and possible the most fun working on this film was Kate Hudson. It was lovely to see her back to play a tone-deaf washed-up model in this story. Johnson brought a different, more modern type of humour to this script and worked in the context of the players in this game.

It is even more intricate than its predecessor and feels like a never-ending cycle of twists. The way Johnson set up this murder mystery plays out on different levels and it’s up to the audience to keep track of where the story is going. There are some unique choices made by Johnson both behind the camera and with his script. He was able to explore different character dynamics because of how he pieced the story together. There are moments in this film that will leave you impressed with how Johnson managed to write something so layered and fun. Craig and Johnson will continue making whodunnits because they work together well.