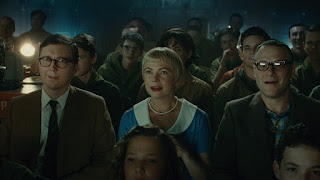 When we think of quintessential Steven Spielberg, we think about his early work filled with childlike wonder, heart, and playfulness behind the camera. The Fabelmans shows the start of Spielberg’s dream to make moving pictures. What started as a phobia while watching a train heading straight for the screen, he turned it into a true talent that has blessed the film industry for years. Instead of holding onto that fear, he took control of one aspect of his life translated into freedom of expression. Spielberg’s heart and soul are in this movie. The culmination of his work has come before this to make this one of his most personal films to date.

We meet a young man named Sammy Fabelman (Gabriel Labelle) growing up in post-World War II era Arizona. He discovers a shattering family secret and explores how the power of films can help him see the truth. Films are a version of the truth, a particular window to see different stories through multiple perspectives. Sometimes movies can show us what lies beneath the surface and how the mind truly works. Co-writers Tony Kushner and Spielberg craft an autobiographical coming-of-age story that incorporates family issues, mental health, and the power of cinema. It does take a bit to find its footing, but once the pieces come together Spielberg works his magic.

Sammy’s artistic and emotional connection with his mother Mitsy (Michelle Williams) is the most beautiful relationship in this film. As Sammy grows older he sees life through a different lens. He understands and also sees his mother as a woman trying to do her best. Sammy escapes into filmmaking to create a space for himself. His father calls his work a hobby and that can be extremely frustrating for anyone with an artistic side. In each movie, Sammy makes a step closer to his dreams and it was inspiring thanks to Spielberg’s direction. Newcomer LaBelle gave such a heartfelt and inspiring performance as Sammy. The warmth that came from his character through his love of movies was the driving force of this film. In a way, you could feel Spielberg shine through him in certain scenes.

The Fabelmans is one of Spielberg’s most personal films to date. It is a coming-of-age film that balances the reality of life and what it’s like to be a dreamer. Once you have a connection with art, it’s hard to ever close that part of your brain. Spielberg shows the link between personal issues and creating something beautiful from all of those emotions. Michelle Williams gives a career-best performance as Mitsy because of how she slowly exposed the complexities of being a mother and a woman. It felt as if Spielberg had so much fun going back to his roots and exploring his family while showing the audience why he loves the movies.