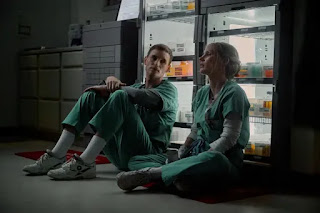 The true crime genre is a crowded one. Between a seemingly infinite number of straight-to-streaming documentaries and countless films based on real events, it’s easy for quality content to get lost in this constantly growing category. While it isn’t exactly genre-defining, The Good Nurse is a well-crafted thriller, whose horrifying true story provides sufficient chills throughout.

Despite being a crime thriller, this movie isn’t quite as traditional as you might expect. Mysterious deaths are occurring at the hospital, and there’s a team of two detectives working the case while facing resistance. It sounds like a cookie-cutter plot, and honestly, there are moments where the story does wander into the worn-out territory. However, it’s able to break free of those cliches, because it pivots the primary focus away from the investigation, and onto the relationship between its two main characters.

There are a few reasons this relationship is so compelling, but most of it comes down to the two incredible actors at the centre of it all. Jessica Chastain and Eddie Redmayne give this friendship - and the movie as a whole - a grounded believability. There’s obviously something sinister happening with Redmayne’s character, but because he shares such fantastic chemistry with Chastain, it’s easy to see how they

became close friends through their time together in the ICU. This relationship and his performance bring a welcome level of humanity to the character.

Tobias Lindholm delivers an appropriately ominous vibe with his cold, dimly lit environments and long, steady takes. It’s an interesting aesthetic that often feels as if you’re watching a horror movie. Biosphere’s eerie score lends itself perfectly to the visuals, making for an unsettling presentation. While the dreary aesthetic does match the story’s tone, it emphasizes the drawn-out pacing of this slow-burn thriller, causing it to drag from time to time.

The Good Nurse provides an unsettling look at a real-life serial killer, strengthened by two outstanding performances from Chastain And Redmayne. Despite some pacing issues, this is a gripping true story that’s well worth your time.