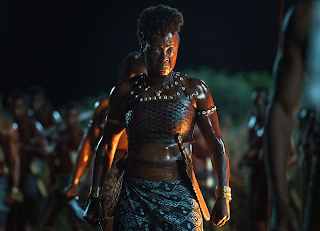 Viola Davis has branched off into many action films over the last few years but The Woman King marks her as a certified badass. Very few times I have left a theatre with my heart beating with such excitement to see the heroes succeed, Woman King was one of them.
The Woman King tells the story of the Agojie, an all female unit in the West African Kingdom of Dahomey in 1823. The Agojie are also the inspiration for the Dora Milaje warriors in Black Panther.
We are introduced to the world of the Agojie through the lens of Nawi (played by Thuso Mbedo) who is a new trainee in the battalion. we get to understand the lifestyle, and training methods of the Agojie as tough by their Commander Nanisca (viola Davis) and second in command, Izogie (Lashana Lynch). The Agojie undergo strict training and order in order to be in top form at all times.
John Boyega is also fantastic in the role of King Ghezo, King of Dahomey. He has an interesting character dynamic with almost every character in the film as Dahomey is facing power struggles, a slave trade war and tension with the throne. He is kind, merciful and charismatic to all of his people and his enemies.
All of the characters are incredibly well written and layered as they struggle with their internal demons and the demons that are trying to enslave them. There is a big plot twist half way through the movie that was questioned but I would argue it is necessary to the plot and the overall character arc of two of the leads.
The Woman King is an action-packed, character driven story that puts fierce women at the forefront of the African slave trade. It is an empowering story of both womanhood and the horrors and struggles Africans had to endure to survive and fight for their lives. Viola Davis' character, Nanisca marches these women to fight for their freedom and the freedom of their people.
Woman King is now in theatres in Canada and the U.S
Review by: Stefano Bove
8.5/10