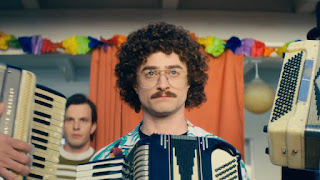 Weird: The Al Yankovic Story is unlike any other biopic film and one only a guy as "weird" as Al Yankovic can come up with.

What began as a short film parody back in 2010, finally became a large format film after the biopic boom of the last few years. Most biopics, as unique as they are, have a unique structure and this movie pokes fun at all of the typical cliché moments that are utilized in biopic films and it makes for an extremely funny and enjoyable time. The film never takes itself seriously as it makes fun of musicians, the music industry, and Weird Al himself.

The film tells the fictional tale of Weird Al Yankovic from childhood closet accordion player to global and platinum parody artist. His fame has no bounds and even attracts the attention of drug lord Pablo Escobar.

Daniel Radcliffe has had such a fun catalog of films since Harry Potter and Weird continues that trend. He clearly had a lot of fun filming this movie and getting into character. And stated that he practices the Accordion for weeks on end to try and learn what he could before shooting. Evan Rachel Wood plays an insane version of Madonna and is a delightful pairing for Daniel. They have great on-screen exchanges and both clearly give their all to these roles.

Some of the jokes and gags do run their course after a few repeats but the film's fast pacing and consistant cameo pushing are enough to drown out those small minor issues.  The film boasts one of the largest collections of cameos in recent history in what is one of the funniest scenes I have watched in a very long time.

I never really listened to Weird Al growing up so this film introduced me to a lot of his parody tracks; The rest of the theatre and I were bursting out in laughter the whole time.

Everyone is talking about the fact that this film is a Roku Original and they seem to be off to a fantastic start with Weird as their first major release. The production for this film looked fantastic and Authentic to the '70s and '80s. It is shocking to hear that this film was shot in only eighteen days as most major productions take much longer than that.

Weird: The Al Yankovic Story is available On Roku on November 4th. It is a wildly entertaining film that pokes fun at the biopic genre and takes you on a hilarious ride through the imagination of Al Yankovic and this parody of his life.