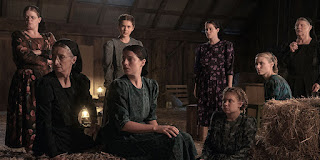 Women are on another intellectual level when they discuss anything. They tend to break down any situation, no matter how small, and weigh the endless possibilities. There can be many outcomes and they asses the repercussions of their actions. Women can see a situation unfold before it even happens because they have to always be prepared. Society has conditioned women to be prepared for anything, while men can just take flight and not take accountability for their actions. So to see a group of women in Women Talking making a very calculated decision regarding an abusive relationship is one of the most authentic on-screen experiences.

In 2010, the women of an isolated religious community grapple with reconciling their reality with their faith. Based on the novel by Miriam Toews. Writer-director Sarah Polley adapts the novel with such care and precision in every aspect of the filmmaking process to bring this story together. The importance of this feature is to start a conversation, not only amongst women but men as well. There are different discussions about how women can break free from certain cycles by staying and fighting, leaving, or doing nothing. When the colony of women decides to challenge the men who have abused them they contemplate the best approach. It was just mesmerizing to watch each character in this cast voice their opinion with a valid thought because a decision such as this one is too difficult to make.

Montpellier worked closely with Polley to have multiple women’s faces within the frame at all times. It was more effective during the discussions to have one woman stand out stating their point and have women within the frame reacting. He used Panavision lenses that are called ultra vista lenses because there’s still this old quality to them with a level of sharpness so you could still see the performances. They chose to shoot with a wider aspect ratio which also creates this godlike big world feel for its exterior while the conversations in the barn felt small and intimate. There was a sense of comfort within the barn with it being lighter and more vibrant at times. Then the vastness of the outside added to the worry of breaking free of what they’ve known for so long.

Women Talking is tenderly directed by Sarah Polley as she uses the conversation among women to further create a safe space for the subject matter. It is an educational piece for men, women, and children to understand how to raise the next generation. Polley rarely shows any acts of violence towards the women but utilizes flashbacks to show the aftermath of graphic situations. In a way, those cuts were more effective than showing the violence to its full extent. The words on the page were expertly performed by the cast, but it comes down to the visual storytelling to evoke the emotions of the audience. It’s an incredible feature film that is a necessary watch, not from just a technical standpoint but to be part of a bigger conversation.