All Quiet on the Western Front Review 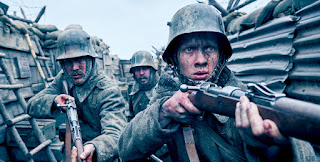 A masterful presentation of the First World War; All Quiet on the Western Front finds humanity amongst the chaos, painting a harrowing portrait from a perspective rarely shown in a film. This is not only one of the best films of the year, but it stands alongside the best World War I films ever made.

Based on the controversial, best-selling novel of the same name, this modern adaptation speaks on the horrors of trench warfare, following a group of young German soldiers through hell and back. It drives home it’s anti-war message with a brutal and terrifying depiction of The Great War. However, it’s the stark contrast between the high-ranking officers - safely in their quarters sipping wine, eating freshly baked pastries - and the soldiers - dying on the battlefront, pulling stale bread from their blood-soaked pockets - that resonates deepest.

The battle sequences are brought to life with such vivid and gritty detail, immersing you in the terror these soldiers experienced on the frontlines. Director Edward Berger makes expert use of practical effects with minimal CGI, which lends each battle a visceral sense of realism. James Friend’s striking cinematography brings beauty to the hellish setting, and the original score, beautifully composed by Volker Bertelmann, adds a looming feeling of dread to an already tense film.

The movie isn’t afraid to slow down, allowing the audience to connect with the soldiers in lengthy, character-driven stretches between the action. At the end of the day, these are human beings on both sides of the conflict, as the quieter sections of the movie make crystal clear. We’re given plenty of time to get to know these men, proving they are more than just “boots with a rifle”.

All Quiet on the Western Front is an exceptional achievement in warfare cinema. This ruthless depiction of the horrors faced by millions of soldiers who gave their lives is powerful, haunting, and demanding of your attention.

All Quiet on the Western Front is now available on Netflix.