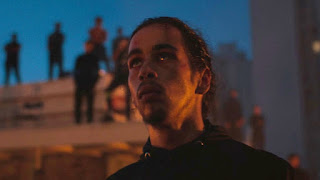 Immersive, emotional, exhilarating, and powerful; Athena is a Greek tragedy wrapped up in politically charged, socially relevant chaos. It’s a remarkable technical achievement in filmmaking, and should not be missed.

The movie immediately grabs you by the collar and drags you through a brutal, city-wide riot over the course of a day. The 11-minute “one take” opening sequence is jaw-dropping and sets the stage for the nail-biting events that follow. Athena is filled with expertly orchestrated long takes that redefine the way action scenes can be shot. Honestly, some of the camera work seems almost impossible, but every shot is executed flawlessly.

While most of the film revolves around the moment-to-moment action, it lets up occasionally to focus on the more personal story at its core. This is the tale of a family ripped apart by tragedy, with two brothers forced onto opposite sides of an escalating conflict. It’s a simple, yet powerful narrative that provides further gravity to the ensuing chaos tearing its way through the city. The unambiguous ending left me wanting a less concrete conclusion, but thankfully, the story is no less impactful because of it.

The sense of immersion comes from not only the expert work behind the camera but from the two lead performances that drive the story forward. Both actors project a real sense of purpose and passion onto their characters, allowing you to truly feel how heavy this conflict is weighing on them. They are both magnetic in different ways and incredible in the small amount of screen time they have together.

Athena is a tour de force directorial debut, showcasing some of the finest camera work I’ve ever seen. The expert filmmaking is matched with a story that hits hard on an emotional level, culminating in one of the very best movies of the year. Check it out now on Netflix.