House of the Dragon S1 Review 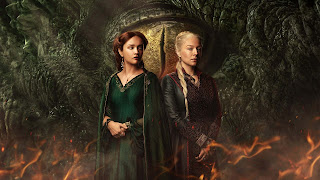 For eight years, the whole world cleared their Sunday evening schedules for Game of Thrones. It was, and still is, one of the biggest and most iconic shows of all time. House of the Dragon was tasked with not only living up to GOT’s legacy but making up for its universally panned final season. Although it has a ways to go before it rivals GOT at its best, this is an outstanding first season, that shows tremendous potential for the years to come.

The series feels instantly familiar, with plenty of the drama, politicking, violence and sex that made Games of Thrones such a hit. However, this time around the slower pacing has been replaced by much swifter storytelling, breezing through two decades of plot in just ten episodes. There were times I wanted more detail from a particular plot point before the show skipped ahead, but the time jumps work beautifully for the most part.

With such frequent and lengthy-time jumps, recasting for certain roles is a necessity. With dozens of characters (many of whom have ridiculously similar names), the casting gets a bit messy, and confusing. Some characters go through several actors, others are aged with makeup, and some look exactly the same for 20 years. The inconsistency is never enough to ruin the show, but it’s definitely a big distraction.

Thankfully, everyone is exceptional in their given role. This is one of the strongest ensemble casts we’ve seen in years. Milly Alcock shines as the younger version of Rhaenyra, leaving such a big impression in just five episodes. Matt Smith is menacing but so very watchable as the unhinged Daemon Targaryen. It’s Paddy Considine, though, who steals the season, with an all time great television performance. His portrayal of King Viserys is exceptional, and I won’t be surprised if it lands him an Emmy.

House of the Dragon transports us back to the fascinating world of Westeros, giving us a reason to get excited for Sunday nights again. With record viewership and a strong first season in the books, it’s safe to say this is going to join its predecessor as one of the biggest shows of all time.