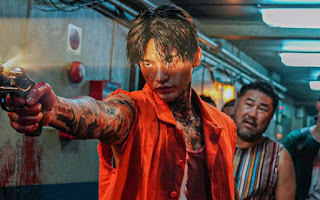 There’s a moment in this movie where a character picks up a top-secret document and mutters to himself “Project Wolf Hunting - how tacky”. That line perfectly sums up this ultra-violent bloodbath, although there’s still a bit of fun to be had with all the chaos.

The premise is a bit of a stretch but serves as a functional setup for all the brutal events to come. A group of dangerous prisoners are being transported via cargo ship from Manila to South Korea, with several police officers overseeing the operation. Little do any of them know, there’s something sinister taking place deep within the bowels of the ship. It isn’t long before all hell breaks loose and the blood starts flowing.

Sorry, did I say flowing? I meant spraying…or maybe gushing… or perhaps pouring would be a better word. The point is, there’s a lot of blood. So much blood that I’m genuinely curious about how many gallons the crew went through during filming. This is one of the goriest movies of the year, so if that’s your reason for watching, you’re in for a treat. It’s absolutely ridiculous, and honestly reason enough to watch the movie.

However, without any real substance, there’s only so much gore you can endure before you’re completely numb to (and bored by) the violence. That’s where Project Wolf Hunting falters. It unfolds like two separate movies running parallel to one another. One is a cop vs criminals survival movie and the other is a creature feature. Unfortunately, neither one is all that interesting. There was potential for the two stories to intersect and form something new, but they don’t really have any impact on each other at all.

If you’re in search of a ridiculously over-the-top bloodbath, Project Wolf Hunting has you covered. The story never matches the creativity put into the gonzo level of violence, but it’s a serviceable vehicle that takes you from one gushing head wound to the next. Check it out in select theatres on October 7th.