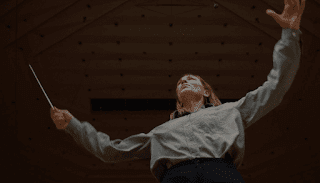 Director Todd Fields writes and directs this icy, multifaceted exploration of fame in a new generation with an old mentality. Renowned musician Lydia Tár is days away from recording the symphony that will elevate her career. When all elements seem to conspire against her, Lydia's adopted daughter Petra becomes integral emotional support for her struggling mother. The structure of this film worked in favour of Fields and Blanchett's performance as Tár. Within the first scene, there's an interview with her discussing who she is and why she became a composer in the first place. Fields also used this time to explore gender dynamics in the industry and how Tár has presented herself over the years. Blanchett effortlessly delivers paragraphs of lines educating the crowd on specific compositional terminology and the power of an orchestra.

It's an incredible film that places Blanchett in the center of every single scene as she descends into her darkness. The first half of this film has a clear direction in showing who Lydia Tár is and how she lives every day. We get to know her within minutes and see her eccentric nature as a composer. But like every artist who gets sucked into the fame and pressure of being the best, she forgets why she got into her field in the first place. This is where the film's second half falters a bit because it loses its sense of direction. There is a scandal that Tár tries to suppress while trying to write a piece for her daughter because she is the one light in her life. Fields integrated the challenges of writing through her sleepless nights and hearing different sounds everywhere. The cinematography by Florian Hoffmeister is fantastic and keeps her at the center of everything for the entire film.