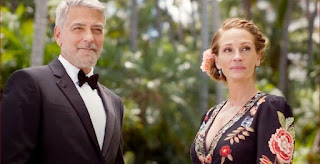 When a divorced couple, Georgia (Julia Roberts) and David (George Clooney) team up and travel to Bali to stop their daughter from making the same mistake they think they made 25 years ago, their antics push them closer together. Director Ol Parker constructed a fairly simple romantic comedy that has the divorced couple at the forefront at all times. Parker and his co-writer Daniel Pipski made sure to explore all sides of relationships; old and new. To witness the budding relationship between Lily (Kaitlyn Dever) and Gede (Maxime Bouttier) was lovely. Bouttier and Dever had such sweet natural chemistry that only first love can carry. To counter the two of them, Parker and Pipski created a harsh, sarcastic back-and-forth between the divorced couple. The audience can see where love begins, grows, and ultimately how it turns into a situation.

This movie would not have worked without Roberts and Clooney. Roberts still has that gorgeous smile and infectious laugh. Clooney was as charming as ever with his sly smile. It was incredible to watch them on screen together again. Many women can connect with Georgia’s character because she wanted to put herself first and not forget who she was. All those years ago, at the beginning of her journey into motherhood, she was concerned that she would lose herself. So instead of battling through it with her husband David, she decided to navigate it on her own and fight for her individuality. Meanwhile, David was crushed and held onto their love until the present day. His sarcasm and little jabs towards her were out of frustration. He couldn’t have her and he longed for her. Both of them gave such heartfelt and fun performances that whenever they weren’t on-screen their absence was felt.