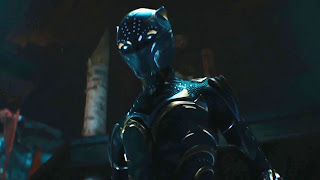 Wakanda Forever is the most anticipated MCU film since Endgame. With the tragic passing of Chadwick Boseman, the team behind this film had a difficult task to take on but it was one that they approached with professionalism and grace. Ryan Coogler delivered a film worthy of Chadwick Boseman's Legacy and the Black Panther. Still grieving over the tragic death of King T'chala, a new threat emerges from below the ocean to challenge Wakanda during its darkest times. Shuri must navigate this new world without her brother and try and protect the world's newest genius; Riri Williams aka Ironheart.

Grief and love are at the very core of the Black Panther series and this movie touched on that in almost every plot devise, including our villain. Namor, played by Tenoch Huerta is one of the strongest antagonists in the MCU. A good villain is usually mirrored by the hero, Namor and his city of Talokan are not that different than Wakanda. and their situation in the scale of the global economy. Namor and his story are so compelling, If this were not a Black Panther movie, we would be rooting for Namor and Talokan.

As Shuri carries the weight of her brother's passing, so too does Letitia Wright as she carries the weight of now leading this film but she and The rest of the ensemble cast all deliver stellar performances. With a four-year gap between films plus the events of the Avengers films, Wakanda Forever had a lot of stories to tell and a lot of characters to balance. A few characters such as M'Baku got slightly sidelined but Winston Dukes nails each of his scenes so it makes us for it.

This was a fairly contained story (by MCU standards) but the stakes have never been higher, this is all thanks to a much darker and serious tone that has been lacking in the post-blip era. Phase four has shifted to much lighter tones, but the story that needed to be told could not work with a lighter tone. The only characters in the film who do shift the tone a bit are the Americans( Ross and Ironheart), which is an indicator that they are out of touch with the delicate nature of Wakanda and Talokan, nor on their level. Agent Ross and Ironheart, played by Martin Freeman and Dominique Throne are in the film to expand the MCU into future projects but Ironhearts introduction is integral to the story. She is more than just a simple cameo; Her story is deeply rooted in the conflict between Wakanda and Talokan.

Wakanda Forever brings Marvel's phase four to a close on a strong note with a continuation of the story, worthy of the Black Panther legacy.