Bones and All Review 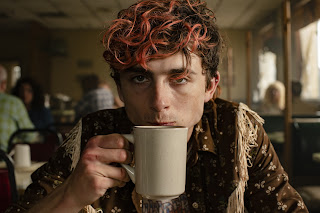 The film begins with paintings as the credits roll, and there’s an instant familiarity with the artistic side of Guadagnino. Without doing much, he sets many locations for Maren and Russell acts like she is an outcast at this school. She wants to make friends, but she doesn’t understand her urges. When Maren goes to a sleepover (without her father knowing), she gets close to one of the girls. She asks about her past, but Maren is detached; her mind wanders because of her heightened sense of smell by inhaling her scent. The look of carnal desire on Russell’s face says more than words ever could. There’s a mixed wave of lust and discomfort while watching her, which is confusing. Then without thinking, she takes the girl’s finger into her mouth, and blood gushes everywhere. Guadagnino expertly combines grotesque imagery with sensuality to heighten every emotion in you. It’s impossible to look away at any point because it’s mesmerizing.

Guadagnino does highlight the morality of these characters. They do contemplate whom they eat. Someone like Maren hasn’t fed at all, and it feels like a coming-of-age story for her. The older “eater” named Sully (Mark Rylance) only feeds on people who are about to die because he can smell them. Then there’s Lee, who only feeds on bad people or people without families. The “eaters” can also track each other, which is problematic for Maren. Sully takes an interest in her out of his loneliness in finding someone he can fully be himself with. There’s a hint of desperation, that exits Rylance’s voice whenever he’s around Maren. He truly has one of the most chilling performances of the year. When Maren meets Lee unexpectedly at a superstore, they click instantly. The chemistry between Russell and Chalamet is electric, and they didn’t have to say much to sell that they were that connected. Guadagnino also knows how to capture intimate moments through glances and stolen smiles, which is what he did through Maren’s perspective. It’s visually implied that she had been longing for him the entire road trip to find her birth mother.