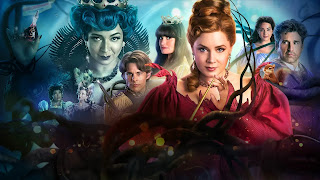 Happily ever after is a fairytale ending that’s been used more times than any of us can count. It’s a cheerfully definitive conclusion to a story, leaving what happens next up to the viewer’s imagination. Disenchanted reopens a story that finished 15 years ago, to show us what comes after happily ever after.

This sequel doesn’t totally justify its existence, but the colourful presentation and energetic performances make it a delightful enough distraction for those who fell in love with the first film. Whereas Enchanted found Giselle as a fish out of water, lost and bewildered by the real world, Disenchanted takes the opposite approach - well, sort of. Here we have the down-to-earth characters from the original navigating new territory, as Giselle accidentally transforms her town into a magical, real-life version of Andalasia. There was the opportunity to twist what worked so well in the first film and have everyone else feeling lost and bewildered. Instead, they all pretty much play different characters, which leads to a far more familiar and uninspired fairytale this time around.

But the cast infuses this story with magic through live performances and a slew of song and dance numbers. This is more of a traditional musical than the first movie, and like most musicals, some songs are better than others. While I wouldn’t call any one of them bad, most are forgettable, with “Badder” - a wickedly fun duet featuring Amy Adams and Maya Rudolph - being the exception. Also, they actually let Idina Menzel sing in this one, which was a frustrating sin committed by the original.

Is this sequel necessary? Not at all. However, it doesn’t spoil the original in any way and has enough of its own personality to get by. Seeing Amy Adams slip effortlessly back into these shoes after so many years is wonderful, even if I can’t help but wonder if happily ever after was better left to our imaginations.