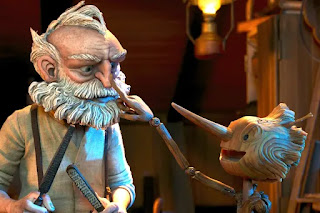 In the years since The Shape of Water took home the top prize at the 90th Academy Awards, Guillermo Del Toro has branched out and brought his unique brand of storytelling to a variety of different artistic mediums. He worked with Hideo Kojima on his expansive video game Death Stranding, opened a temporary art exhibition in Minneapolis inspired by the visual aesthetic of his films, produced several movies, and most recently created a horror anthology series for Netflix titled Guillermo Del Toro’s “Cabinet of Curiosities. Despite exploring different artistic avenues, Del Toro has remained very active within the film industry. Last year, he brought us his Best Picture nominated tribute to the noir genre, Nightmare Alley. Less than a year later, he’s back with his interpretation of Pinocchio.
Del Toro’s latest filmmaking venture finds him working within the realm of stop-motion animation, a style that his visual sensibilities are extremely well suited to. Within the past few years, we have had an influx of Pinocchio adaptations, most of which have done a disservice to the source material, by watering it down to the point where it feels completely soulless. Fortunately, Del Toro’s breathes new life into the classic story, giving it extra dimensions that it may not have necessarily had before. Set against the backdrop of war-torn Italy during the fascist regime, Pinocchio is a tale about love, loss, and the preciousness of the time we have on this earth. In Del Toro’s interpretation, Geppetto is a grieving father who builds a wooden boy one drunken night. A magical entity feels Geppetto’s pain and uses her magic to give life to the wooden boy, giving Geppetto the chance to be a father once more. The film chronicles the adventures of Pinocchio, Geppetto, Sebastian J. Cricket, and a cast of wonderfully quirky characters as their lives are changed by various circumstances.
Pinocchio was in development for 15 years, and it's clear that Del Toro poured his heart and soul into bringing his interpretation to life.
He recreates his distinct visual style through stop-motion animation, crafting a gorgeous and vibrant film that is among the year’s most technically impressive. Every frame is extremely detailed, with a pastel-tinged color pallet that perfectly captures the tone of the film. The production design in particular is meticulously crafted, making the world these characters inhabit feel so larger than life and fantastical, while never feeling too distant from the world we live in.  Del Toro enlists an extremely high-profile roster of talented actors, including Tilda Swinton, Ewan McGregor, Finn Wolfhart, and David Bradley, all of which deliver expressive performances that give soul to the characters they portray.
Pinocchio has a specific magical quality to it that harkens back to an era when “movie magic” was created organically through craft alone, instead of relying on technology and CGI to replicate it. Watching Del Toro’s distinct vision projected on screen is truly awe-inspiring. It’s a timeless classic that will likely go down as one of the best-animated films of the decade, and one of Guillermo Del Toro’s crowning achievements as a filmmaker.
Review by: Tristan French
4.5/5
#netflix #movie #animated #adaptation #netflixfilm #film #Toronto #pinocchio #deltoro