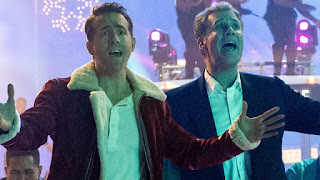 It’s almost hard to believe that the two of them haven’t worked together until now. Ferrell and Reynolds had wonderful chemistry and bounced off of each other incredibly well. Their line delivery, slapstick comedy, and timing all worked in every single scene they were in. On the one hand, you have Reynolds playing his dry sarcastic self, and Ferrell channels his inner Buddy with his whimsical zest for Christmas. Sure, they act as complete opposites for comedic purposes, but once Briggs and the Ghost of Christmas Present head back to their past, they discover they’re more alike than they think. Here, they begin to understand each other and connect on an emotional level to ground the film. There’s some Christmas magic to warm the heart, but it’s those tough, intimate moments from their past that will resonate with audiences.

Another impressive thing was the choreography in the musical numbers. It felt so extravagant and massive, which just added to the magic of Christmas. Reynolds showed true showmanship in every single number, which was a different side of him. Any modern musical that works tap dancing into its numbers instantly has my heart. Not only is the choreography strong and incredibly sharp, but the original songs are well-written. The songs seem almost unconventional because of the lyrics that are used for Christmas, but they’re ultimately hilarious. Especially because Ferrell and Reynolds are the ones singing some wild lyrics. Movie musicals are scarce nowadays, so it was nice to see a reimagined version of a classic story adding something fresh to it.