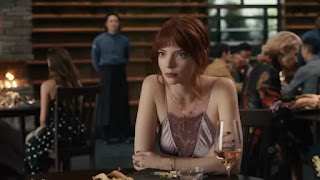 Once the characters get seated for the meal director Mark Mylod does a wonderful job keeping everyone in the frame. Each couple is seated at a table and has their own issues. Multiple conversations are happening at once, and you’re able to get to know these characters quite easily. Mylod’s attention to detail inside and outside of the kitchen made for such an intriguing mystery. Chef Slowik (Ralph Fiennes) at Hawthorne’s planned a menu for his guests that co-writers Will Tracy and Seth Reiss worked into the structure of the film. The way Mylod directed each scene with the following course, while still assembling the development of these characters on screen was a real treat.

The cast was really strong because they worked to the strengths of their characters. Taylor-Joy is always a delight to watch on-screen and Hoult barely gets the recognition when he has a good script to work with. Fiennes was unhinged as Chef Slowik and he was probably the most interesting to watch because of the commentary on criticism in the culinary industry. Apart from this story descending into madness, it’s also very funny because of how the characters interact with one another. How do these privileged people all have secrets of their own as they’ve clawed their way up to the top? Slowik creates the perfect menu to have these characters reflect on their life as they enjoy the near-perfect meal.