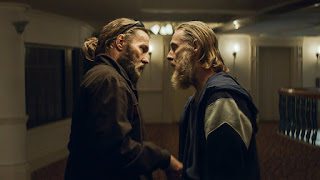 Based on the true story surrounding one of Australia’s largest undercover sting investigations; The Stranger is a gripping, slow-burn crime drama, rife with constant tension.

The movie tackles some dark subject matter, and the bleak presentation captures the tone exceptionally. The striking, slightly desaturated cinematography, the creative editing, and the eerie score go a long way in pulling you into this unsettling investigation. It all works in harmony to convey a sense of isolation and hopelessness, adding more weight to an already grim story.

Joel Edgerton and Sean Harris are two underrated talents, and both are given a chance to showcase their abilities here. They give understated, quiet performances, but you can really feel the gravity of their situation, slowly wearing them down mentally over time. The true crime elements are intriguing, but the psychological aspects are downright fascinating.

The way the story plays out is handled in a way that adds further intrigue, shrouding the film in atmospheric uncertainty. We don’t know much about Harris’ character in the beginning - he’s a stranger to the audience. As the narrative unfolds, we are given hints of his past, and bit by bit we start to construct this puzzle of a human being. Edgerton’s character is initially less complicated, but once we get a glimpse at the psychological damage this case is inflicting upon him, he becomes equally compelling.

The Stranger is a must-see crime drama with outstanding character work to match its unnerving true story. Joel Edgerton and Sean Harris play opposite one another perfectly, with a dynamic that adds tension to an already tense film. Don’t miss this one.