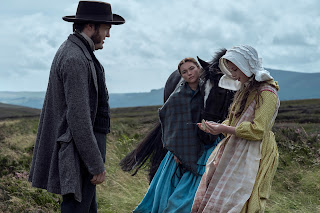 It is one thing to discuss these matters with characters on screen, but it is another to show their feelings through the visual storytelling of the film. Wegner has been such an impressive force with her compositions within the frame that everything complimented Pugh's incredible performance. It seemed as though the visuals and Leilo's direction for this piece completely overpowered the story. To see a young woman conditioned to think a certain way after a traumatic childhood event is difficult to comprehend. Her parents have attempted to help her but have turned her into this empty shell of a young girl to fit their religious narrative of heaven and hell. At the cost of a young life, an older generation must enforce their ideals upon everyone, which is even more problematic in itself. Her parents test Nurse Wright's patience throughout the film, as she pushes her scientific rationalization as to why this young girl has survived without food.

The moments between Pugh and Lord Cassidy together in young Anna's room are possibly the best in the film because of their conversations. Nurse Wright has lost a great deal herself and questions if there even is a higher being out there. How can there be if she has lost so much around her, including herself? We see glimpses of Wright's struggle, and it forces the audience to connect the pieces as to why she is so determined to save young Anna. In return, Anna is so involved in her faith that she doesn't understand the social cues from Wright. The technical aspects of this film are what holds it together, including the chilling score by Matthew Herbert. However, the script, which is adapted by Alice Birch and Emma Donaghue (who also wrote the book) was a bit too dense. The film suffered from pacing issues and felt overly long to get to the final act. Even though the first half was set up to be a compelling narrative, it did suffer as it slowly came to its conclusion.