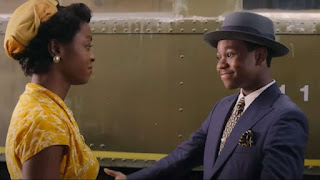 The direction by Chukwu is by far the most important aspect of this film because of what she chose to present to audiences. Her tender and careful direction of Emmett Till’s death was impactful because of what she concealed. Those moments when the camera stayed on Deadwyler to capture her emotions instead of showing the brutality that her son faced were important. There was a level of respect that came with the cinematography by Bobby Bukowski as well. It was a retelling through a mother’s eyes, and Mamie was devoted to her son in trying to expose the brutality of his death. Many powerful moments throughout Till will have you locked in on Deadwyler for giving such an emotionally nuanced performance that will have you in tears. Even though it is a heavy film, it is so unique in perspective and is another layer in understanding the lives of Black mothers in America. Two scenes, in particular, will never leave your mind, and Chukwu intended for them to make a lasting impact as they did in 1955. The sequence of Emmett’s body on the table with Mamie confirming that it’s her son is directly tied into the incredible monologue she gives in court. The visuals of his body and her describing what she saw through a mother’s eyes were incredibly powerful.

Till is a well-written story about a mother who has lost her only son due to racial injustice in America. Danielle Deadwyler gives the performance of the year as Mamie Till-Mobley. To understand this through a mother’s perspective is completely different and has rarely been explored in this way before. It is the most respectful way to honour Mamie and Emmett because they did not show the extent of the violence that he faced. Every single emotion that Mamie expresses will reach you and make you feel for her. Even though tears may start flowing, the anger is under-lining. Especially the way the American media acted toward Mamie and Emmett Till, added even more fuel throughout the film. Chinonye Chukwu truly did capture the most important aspects of this story. She chose to execute certain moments in a way that would properly show the extent of the unwarranted violence in the Deep South. It is a difficult but necessary watch. And Deadwyler did an extraordinary job by grounding Mamie’s story with such an earnest approach.