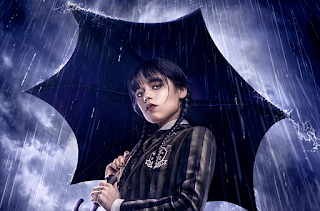 It’s hard to believe Tim Burton has never helmed an Addams Family project before. The quirky gothic stylings of the franchise are right up his alley, so it was only a matter of time until we were treated to his version of the family. While Wednesday may not be exactly what fans envisioned for Burton’s take on these characters, it’s a fun and mildly twisted series elevated by the always-excellent, Jenna Ortega.

Although this show is geared toward a young adult audience, older viewers will appreciate the clever nods and references to the family’s film and television history. Whether it’s the signature double snap or having Ricci return in a different role, there’s more than enough to please longtime fans. Burton’s signature style gives the series an appropriately dreary look, even though it doesn’t always meld with the teen-focused storytelling.

The production design is also quite impressive. Everything from the gothic architecture of the Nevermore campus to the creature design looks great. Thing Addams in particular represents some of the most seamless VFX work I’ve ever seen, and I’m dying to know how it was accomplished. Danny Elfman’s title theme and Chris Bacon’s score make great finishing touches.

Let’s get something straight - this show works because of Ortega, and without her, I wouldn’t go out of my way to recommend watching it. Her expressionless expressions and matter-of-fact line delivery are pitch-perfect, and she fills Ricci’s shoes with ease. We don’t get much time with the other Addams’, but it’s not an issue because Ortega owns this role. Watching her play emotionlessly off much livelier characters makes for an amusing contrast.

The season-long mystery is intriguing enough to make for an easy binge, but doesn’t offer much we haven’t seen before. There’s a lot of angsty teen drama throughout that falls flat, but by placing the morbidly curious Wednesday Addams at the center of everything, it gets a pass.

Wednesday caters to teen audiences a bit much to draw in older audiences, but there’s still a lot to enjoy from this modern take on the iconic character. It’s streaming now on Netflix, so snap to it and get watching.