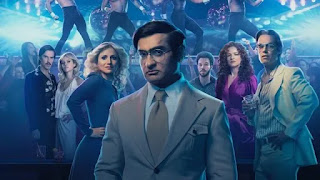 The cast works together extremely well, but the standouts were Nanjiani and Murray Bartlett, who plays Nick De Noia, an Emmy-winning choreographer. As the club received more attention, Banerjee needed to polish off his show for it to grow even bigger. One night, De Noia walked in and left him his card; perhaps it was fate that brought them together, but as the series goes on, it seems like their meeting did more harm than good. This series pits ego against ego and a businessman against a choreographer with status. There is plenty of flashy dancing and fun moments in the club, but the intense business negotiations and backstabbing are what made this compelling. No one ever fully understands what it means to build a business, and Robert Siegel made sure to show every inch of the mayhem. Nanjiani gives one of the best performances of his career as he descends into the madness of becoming the best in the world. He loses himself in this role, and it’s unlike anything we’ve seen him do.

Welcome to Chippendales is an entertaining, vibrant, and dark look at the entertainment industry. It shows how cutthroat people can be and how important a creative idea can be when it comes to the bottom line of business decisions. Nanjiani and Bartlett have incredible chemistry and work together well to make this story even more convincing. Watching De Noia and Banjeree’s relationship grow over the episodes was interesting because they have different perspectives on the business and which aspects to focus on for the Chippendales to grow. The first half of this series sets up Banerjee’s life and his constant need for the next best thing, while De Noia focuses on what’s in front of them with the dancers in the show. We see two different focuses that ultimately alter the Chippendales and their impact. The series will begin streaming on Hulu on November 22nd, and it is worth a watch if you want to know more about the creation of the Chippendales.