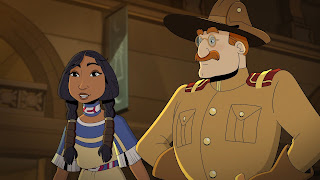 This fun franchise has always been close to my heart for its wholesome upbeat messaging. Kahmurah Rises goes one step further in this animated tale and use the museum and history in a way that the live actions film franchise just couldn't.

Nick Daley picks up where his father left off as night watchman of the Museum of Natural History. When Kahmunrah escapes and sends the whole museum on a wild adventure across time to stop him. Nick is the perfect candidate for this position already having the experience of understanding what a night at the museum entails.

I was a bit worried about who would play Theodore Roosevelt after Robin Williams but Thomas Lennon did a great job of matching the iconic energy from the live-action films. The rest of the cast is fantastic with a roster including Zachary Levi, Steve Zahn, and Gillian Jacobs. I especially enjoyed the voice of Kahmunrah by Joseph Kamal.

The relationship between Larry and Nick is integral to the story as much as I would have loved for their story to have intertwined a bit more, It makes much more sense for Nick to inherit the Museum for a new audience.

The animation was really fun and vibrant. It not only shows that live action and animation can cross over more often but can be used as a fun tool to explore other elements of the world in ways that could not be expressed by live action.

Night at the Museum is an adventure film that brings you on an exciting adventure through time. I grew up with the film series so I have a connection to it but I think it has something to offer a family of all ages.

Available now on Disney Plus