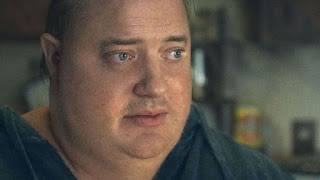 Life can change within seconds and alter how we view the world. More importantly, when life serves us lessons, we also look at ourselves differently. Sometimes, we even question the value we offer to the world. One can lose faith in humanity when those who supposedly supported you turn their back on you in your time of need. It takes a very strong person to continue to be positive and uplift others after going through their own traumatic experiences. This is who Charlie (Brendan Fraser) is in The Whale. He has lost his family and his lover, but the one thing he hasn’t lost is his positivity which is the most endearing thing about him.

We meet Charlie as a reclusive English teacher who is suffering from severe obesity and attempts to reconnect with his estranged teenage daughter Ellie (Sadie Sink) for one last chance at redemption. On the surface, it is a chance for Charlie to get to know Ellie after years of being forced to stay away from her by her mother. He believes that the only thing that he has ever done right is bringing his daughter into this world and he knows the potential she has to be great. There is so much pain between the two of them; Charlie for leaving her and Ellie for feeling abandoned. Sadie Sink gives a rugged and emotional performance that counters Fraser’s vulnerability and kindness.

Darren Aronofsky’s direction is very strong as he keeps the essence of the play, written by Samuel D. Hunter. The story takes place in one apartment and even though it feels static, the characters that fill each scene bring so much to the atmosphere. The physicality of Charlie moving through the apartment actively expresses how much of himself fills the apartment and how much of his past self lingers on the walls. Fraser gives a career-defining performance in this film and it’s because of how well he understood Charlie. It’s a tough role to play because Charlie purposefully cares about everyone else but himself. He wants to fade into nothingness because of his past trauma but still leave something meaningful behind.

The Whale is a stunning character piece for Brendan Fraser who gives such an emotionally raw performance as Charlie. He is the driving force of this film. Without Fraser, the connection to the character would hold no weight. There’s so much care that went into Charlie’s story and Aronofsky captured every side of him in this apartment. Fraser and Sink have such emotionally charged scenes that show the similarities between their characters. They both have the same level of intellect but use it differently throughout the film. The ending of this film holds so much power because of the slow build between Charlie and Ellie’s relationship. Every small detail throughout is tied together to create an emotional ending.