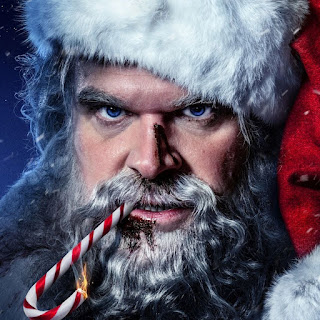 When a wealthy, dysfunctional family comes together on Christmas Eve, there are bound to be some personalities to play with. Co-writers Pat Casey and Josh Miller took the best aspects of Home Alone, Die Hard, and National Lampoon’s Christmas Vacation to make a fun original story that will become an instant Holiday classic. Director Tommy Wikola did not hold back during the action sequences because it works with Santa’s abilities. Those fight scenes had inventive choreography that used any Holiday decoration they could find. On top of that, the jokes all landed, and every member of this cast delivered the lines effortlessly. Not only was this wickedly funny, but it was entertaining the whole way through. It was fun to see Beverly D’Angelo back on screen doing what she does best and answering everyone with a snarky remark. The one standout, apart from Harbour, was John Leguizamo as Scrooge. He came in guns blazing and delivered his lines so harshly that it was impossible not to laugh at the one-liners Casey and Miller came up with.

Habour gives us one of the best versions of Santa Claus because he’s the most grounded and realistic. They decided to give him a backstory to explain his fighting reflexes, which worked to show that everyone has some good in them. The reason why Harbour worked so well is because of the history he already has with audiences. Being the father figure in Stranger Things has already given audiences that comfort in seeing him, which translates to him being a believable Santa. Harbour embodied jolly old Saint Nick in two ways; the grumpy man tired of delivering presents to ungrateful children and the cheery, hopeful Santa who uses his Christmas magic for some good. To mirror Santa, young Trudy pulls a page out of Kevin McAllister’s handbook and has some fun. Of course, those scenes are a bit more graphic in this film, but the anticipation of the boobytraps working made it one of the best sequences. The tag team of a young girl believing in Santa is what he needed to restore his faith in the holiday.