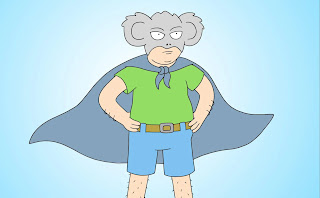 Kevin is a regular middle-aged man with a secret identity, He really is a crime-fighting Superhero named Koala Man and his mission is to protect his town of Dapto in Australia. He may not have special powers but he makes sure everyone in the town puts out their garbage bins on time. His family looks at his superhero extra curricular as a hobby but Kevin is out to show them and the rest of Dapto that they need Koala Man.

Many of Koala Man's villains are hilarious takes on many aspects of male adulthood. The traddies are a group of tradesmen that attack Kevin after he tries to help an old lady by looking at her electrical panel. Another villain is a garbage monster that attacks the town after no garbage is delivered to the dump after Kevin forgets to put out his bins causing a chain reaction across the town.

Koala Man takes place in an interesting alternate timeline of events that change the course of many countries. The Titanic never sank, Australia is the superpower of the world and Nicole Kidman is the Queen.

The show's creator Michael Cusack has been working on the Koala Man universe since 2010 and has made a few shorts since with Damo and Darren in 2014. His dedication to the characters over the years is the sole reason Koala Man is as hilarious as it is.  Koala man shows the universe's growth over the years, especially with the ability to boast Hugh Jackman as a voice actor. Cusack is also the voice of Kevin, his over-the-top Aussie accent is brilliant for the character.

Jackman voices the town councilman and all around, cool guy. The town of Dapto is filled with larger-than-life personalities including Kevin and his family,

Koala man is a really fun animated comedy for adults. It is great to see the animated genre continue produce content for adults. Koala Man is available on Hulu and Star