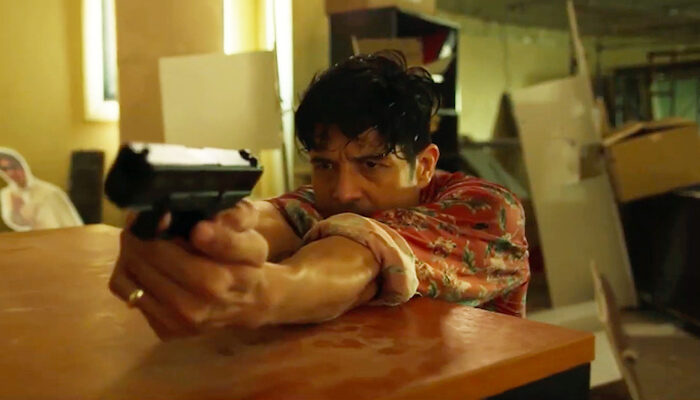 Jon Foo stars as Micheal, an ex special forces soldier who must save his wife and daughter from a terrorist cell that is attempting to rob a bank. Julaluck and her real life daughter Angelina are kidnapped by the terrorist leader, Cooper played by Clayton Norcross.
The action sequences are what really sell this movie. Jean-Marc has an extensive career as a martial artist and Kung Fu master so he has an eye for realistic fighting on screen. Jon Foo delivers fantastic fighting and martial art skills as well as weapons combat. I was really surprised that the whole film was filmed with one camera which is not evident at all, especially for the fight sequences.
The villain, Cooper is sometimes a bit over the top but it's welcomed as Clayton Norcross sells the crazy exaggerated villain well. His craziness does raise the stakes in this hostage situation and makes his moves unpredictable. There are a few twists and turns with the plot that keep the film a bit more interesting, specifically with Micheal and Cooper. The action sequence with these two is one of the highlights of this film, this particular fight was interesting with the added note that the film was made with only one camera because we get the fight sequence from different angles.
Last Resort is a great addition to the action genre and really shows what is possible with smaller budget films if the right people are behind it. Action films are hard to make and require a budget for explosions and editing so it is fantastic to see a film with this many action sequences.
Last resort is available in limited theatres now and available to rent on digital January 10th.
Review by: Stefano Bove
3/5
#movies #film #action #lastresort #hostage