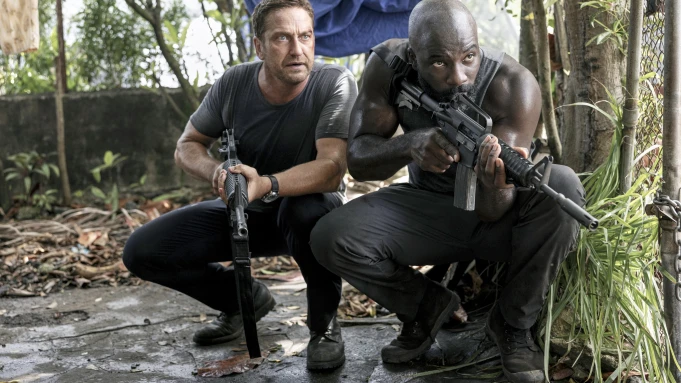 Plane is one of those movies that sounds like it just should not work. Even as you are watching and questioning if a series of events as improbable as these could happen, it's the right amount for you to not turn away.

Captain Brodie Torrence (Gerrard Butler) is flying from Singapore to Tokyo to see his daughter. His flight of only 14 people contains a prisoner named Louise Gaspare (Mike Colter) which is just the first of many crazy plot points that are maybe just crazy enough to work. After being struck by lightning, Torrence must bring down a completely dead plane. He and his co-pilot manage to find a small island to land on but the situation only gets worse from there as the island is his home to a separatist militia and must first learn to survive before in order to get back home.

Butler and Colter have an interesting dynamic on screen but it was one that I enjoyed. Colter taking the lead in many cases are some of my favorite character moments in the film despite the fact that we really knew very little about him. It is great to see Colter back in theatres. I really liked Black and Blue and thought he would be in more action roles after that film. Butler is usually the heavy hitter in his films so it is a big change to see him take a step back and take initiative in ways that don’t involve his fists.

The film's many action sequences are paced well with a few slower but necessary scenes that involve the airline company’s reaction to the plane accident and their aiding in the recovery of the survivors. These scenes also include very little comedic relief which makes sense because the stakes are way too high in the main storyline anyway for any jokes.

The main airline sequence, the struggle to survive and the threat of a separatist army provide enough drama to keep anyone entertained for its relatively quick runtime. Butler has cemented himself as an action star over the years and Plane is a great addition to his catalog.

Plane is in theatres now.