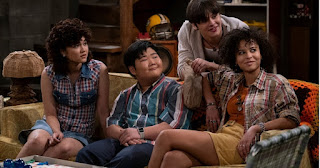 That ‘90s Show is the latest attempt at reviving a beloved sitcom, and like most revivals, it‘s a bit of a mixed bag. Although it doesn’t totally justify its own existence, fans of That ‘70s Show will likely find just enough to make for a worthwhile binge.

There are a few key elements that made That ‘70s Show such a hit - the biggest one being right in the title. It was a time capsule of endless comedic potential, and the writers made excellent use of it. This show doesn’t tap into the potential of its time period as often as it should, leading to a season that sometimes feels like it could’ve been set in any decade. One of the best episodes sees the Foreman’s getting their first computer. It’s standard sitcom formula, but it’s really funny, and I wish we’d gotten more stories like that one.

We’re introduced to a new batch of teenage characters, but there are plenty of familiar faces too. Even if it’s just a quick cameo, it’s nice to see some series favourites return. Kurtwood Smith and Debra Jo Rupp slip back into Red and Kitty’s shoes like they never missed a beat, and I loved having them as season regulars. The show mainly focuses on their granddaughter, Leia, and her group of friends, but it works best when it brings both old and new characters together.

A standard season of a network sitcom has 20+ episodes, allowing ample time to develop characters, relationships and storylines. That ‘90s Show has half that, and the first few episodes really struggle in their attempt to quickly set up interesting plot-lines and character dynamics. The series thankfully begins to find its groove in the back half of the season, but with only ten episodes, it’s over far too soon.

That ‘90s Show doesn’t hold a candle (or more appropriately, a lighter) to That 70’s Show, but this trip back to Point Place has its moments. The wave of nostalgia you’ll feel stepping back into the Foreman’s home will likely bring a big smile to your face. I think we’re all alright with that.