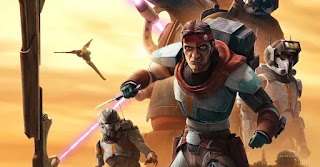 The bad batch is back with a brand new season. Hunter, Omega, wrecker, echo, and tech are sitting comfortably working with Sid as the growing threat of the empire continues to expand across the galaxy.

As far as the empire is concerned, Crosshairs is the only surviving member of Clone Force 99.
Episode one and two start off slow with a two-parter mission that sees the team invade Dooku’s castle for treasure. This episode, like many others in the season, unfortunately, doesn't really push the team’s momentum forward.
Episode three is where the season starts getting a bit more interesting as we have a solo empire episode about Crosshairs and the return of Cody. This episode is one of the best and darkest that puts us directly in the midst of the empire. Crosshair and Cody have a lot of character growth in such a short amount of time, more so that can be said about the squad.
The rest of the season is sprinkled with some side mission filler but many of them bring about some interesting characters and team developments. The main storyline episodes are some of the best the series has offered to date.
As the story progresses, it soon ties into the larger story of the empire, the galaxy, and the fate of the clone army as the empire's grasp rages on and continues to push the stormtrooper program. It is great that The story of the clones is continuously being told as we never fully knew what happened to the clones after the stormtroopers rolled in.
Season two of The Bad Batch is a big improvement from the first season in many ways. The shuffle back and forth of other characters and storylines is what the show needed to not be stale over time.
The second half of the season is a massive improvement in terms of character development and integration into the overall story which leaves us on some massive cliffhangers by episode 14.
The first two episodes of The Bad Batch are available now on Disney plus with a new episode each week.
4/5
Review by: Stefano Bove
#starwars #thebadbatch #disneyplus